Welcome to the new version 4 Combat Evolution HUD. This is a complete overhaul of the original HUD and game system. I’ve stripped out a lot of unnecessary code to increase the HUD performance considerably over prior versions, fixed some long time bugs and limitations, re-mastered and recreated many animations and redesigned the HUD layout. In this document I hope to explain in detail all the features of the HUD as well as cover some of the game play aspects. 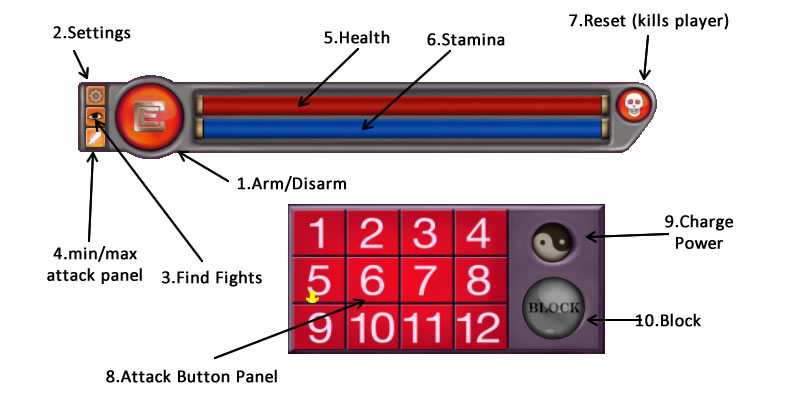 1. Arm/Disarm – Click this button to activate/deactivate the HUD. If you have a weapon attached this will draw/holster the weapon.

2. Settings menu displays all the huds options (see further down in this document)

3.Find Fights – Click this button to display the find fights menu. This currently has two options. Firstly a link to the forums where you can ask people for fights or see who is looking for fights and find active Combat Evolution Locations etc. Secondly it contains an option to scan around you for other people wearing a compatible HUD, and then send them an invite to fight in the form of a drop down menu request.

5.Health bar – Depletes when you take a hit and slowly regenerates when stamina is full.

6.Stamina – Depletes when you make various attacks. It regenerates much more quickly than the health bar. Health only regenerates when stamina is full.

7.Reset – This will reset your health. Note however it will kill your player. This is to prevent combatants resetting in the middle of a match. It is registered as a self kill.

8.Attack panel – this is the main attack panel. Click the numbers to perform an attack. For more information on hit points etc read further down.

9. Charge Power – Click this button to charge for a power attack. It takes about 5 seconds to fully charge during which time your avatar cannot fight. A charged power attack lasts a short time but allows an attack with increased power. A power attack can also be charged by blocking an incoming attack however it only lasts 4 seconds, so you need to counter attack quickly.

10. Block – This will block incoming attacks. When an attack is received while blocking the block is immediately dropped. You will need to hit block again to continue blocking. You will also have a power attack charged for 4 seconds though so if you are quick you can use this opportunity to counter attack.

When your HUD is active there are two ways you can control attacks. 1. by using the keyboard and 2. By using the attack panel. Please note that the keyboard control method while quicker and somewhat easier to use causes less damage. It is also not possible to perform combination moves using just the keyboard alone.

Keyboard Control
To attack hold down the left mouse key and tap the arrow keys. Each arrow has 3 moves on the HUD bound to it which trigger in a random fashion. To block an incoming attack use the page down key on your keyboard.

HUD Attack Panel
The recommended control method is to use the attack panel. Each number on the panel represents a different attack. When you click on one of them a small arrow will hover above where you clicked as an indicator. The attack panel also has a large block button and a charge button that when clicked builds power up for a power attack.
TIP: Always Face Opponent
When you walk backwards in SL your avatar is in fact still facing forward even though it may look like it is facing backwards on the viewer. By using the Firestorm viewer you can stop the avatar turning around.

To do this uncheck the following checkbox in firestorms preferences…

When this is activated you can also quickly disable it via the HUD Setting menu’s movement submenu.

Fix Avatar In Place
You may find on some occasions if you are fighting monsters or using the HUD with another compatible combat system that you want to make the avatar fix in place when attacking rather than slide around. You can turn this feature on/off via Settings > Movement > enableSA

When you click the yin/yang button on the attack panel your avatar will go into a charge attack pose. It takes about 5 seconds for an attack to charge during which time your HUD is not able to block or make any attacks. Once charged you have a limited window of about 10 seconds to perform a powerful attack with about 12 hit points. When you charge your stamina depletes by 25 points.

As well as manually charge an attack you can quickly charge by blocking an incoming attack. Charging this way gives you a very short window of 4 seconds to perform your counter attack. Please note that when you take a hit while blocking it will cause your block to drop. If you do not want to counter attack you will need to quickly block again.

In prior versions of Combat Evolution stamina did not play a huge role. Most of the original intended functionality I had stripped out to try and reduce lag. The new HUD though is streamlined and very low lag. As a result I have been able to reintroduce this component of the game as was originally intended. Stamina will now be depleted when you perform certain attacks (see below). Health regenerates only when stamina is full. Stamina regenerates more quickly than health. 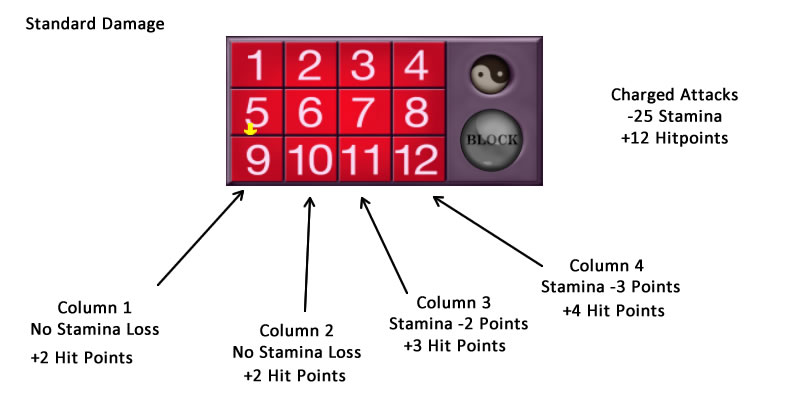 So in summery columns 1 and 2 will not loose stamina however they have lower hit points. So if health is low you are best to use these so your stamina and health can regenerate. To do more damage use columns 3 and 4.

Charge Power Attacks – Click on the yin/yang symbol on the hud to charge a power attack. Note for about 5 seconds your avatar will not be able to block or attack. Then the next attack within the short window of opportunity will deliver 12 hitpoints with a 25pt stamina loss.

Block and counter attack – You can also quickly charge by blocking an incoming attack. Charging this way gives you only a 4 second window to deliver a counter attack.

Combo Moves – The HUDs have some built in combination moves you can deliver. These are pretty hard to do in the middle of a fast fight, but they do award extra points if you are able to perform them. You can find a list of all these moves on the following page.

1+ BONUS POINT FOR USING A DIFFERENT BUTTON FROM LAST ATTACK 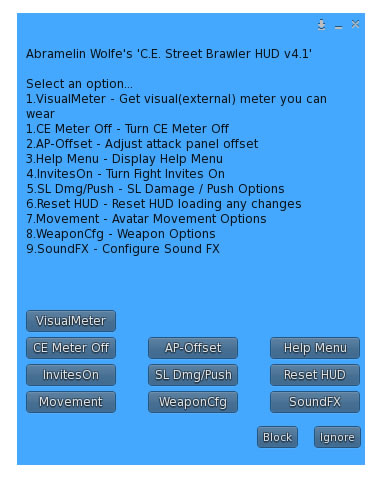 Visual Meter – Will send you one of 3 styles of visual meter you can wear to display publically your health and stamina.

CE Meter Off – Turn the CE meter off if you wish to use the HUD without receiving any damage. This is useful if you want to use the HUD with another compatible combat system. Other systems that should work with it if they rely on mouse click / keystroke attacks.

InvitesOn/InvitesOff – If you do not want to receive invites from other people via the HUD turn this option on/off.

SL Dmg/Push – The HUD does have some options that allow you to do SL Damage or Push avatars in push enabled areas. This menu option allows you to adjust these settings.

Reset HUD – Reset the HUD if you have loaded any new animations etc.

Movement – This menu has two options. First, enableSA which allows you to toggle the stop attack motion. (ie. When enabled your avatar will not move when they make an attack using the keyboard control method, when disabled they will still move around on the ground). Secondly this menu has an option to toggle the avatar always facing forward. (This feature will only work properly if you are using firestorm with the preferences option checked.)

WeaponCfg – This will display the options for any specific weapon or attachment. Usually this will have options to adjust motion trails colour or weapons textures.

As well as being a combat hud, This system is designed to allow customisation of animations and sounds in much the same way as an AO.

There are several settings notecards inside the HUD

AOSettings – Contains the list of standard AO animations
(note in v4, not all these slots are used)

To add your own sounds or animations
1. Drop the HUD on the floor in front of your avatar, drag the animations or sound bites from your inventory into the HUD.
2. Then add the name of the animation or sound to the respective settings notecard.
3. Once this is done take the HUD back into your inventory, attach it and Click Reset HUD from the settings menu.

There are several scores tables

This Months Top Scores
This lists all the months current top scores. These are reset each month at which point they appear on the last month top scores table. Lifetime scores and kills etc do not get reset.

PvP Rolling 30 Days Scores
This is a simple table that displays fights one. This is not reset each month but instead shows as a rolling 30 day period. For this reason it will change and people will move down the list if they are not active. This can be searched by region.

NPC Rolling 30 Days Scores
There will be monsters to fight soon. This table displays all non player controlled fights. This score table also operates over a 30 day rolling period. This can be searched by region.

Last 100 Fights Log
This table displays the last 100 fights so you can recap your fights.

HOW ARE SCORES CALCULATED
This is subject to change and refinement from time to time. In essence though you are awarded more points for fighting players who have a higher score than yours. You also loose points if you lose a match.