We are working very hard at the moment on Combat Evolution Version 4. This is a complete overhaul of the whole game and it will be here very soon!

We have been working on this update for a long time now and although there is still quite a bit to do before its completely ready we are getting very close! Hopefully it will all be ready for release over the next month. As with prior updates, if you already own an earlier HUD this update will be sent to you automatically. The new HUDs will not be compatible with older huds however older HUDs will continue to work with each other in fights. So here is a taster of whats coming…

You may already have noticed the new website! I had to take our old one down due to some bad coding on my part that was bringing my server down. I am now as we speak rebuilding. As well as a number of technical improvements to improve stability and appearance I have added some new features. One problem we had before was that scores etc were based on ‘all time’ scores only. This worked fine in the beginning but after a while some people racked up very high scores which made it very hard for newer players to break in. The main overall scores (not kills) now are reset each month and previous scores are registered as last month scores. For players that simply want to track wins there are also some simpler battle tables that can be searched grid wide or by region to display wins for the past month rolling back from todays date. The main score table uses an algorithm a statistician friend helped with which balances score points given against players of similar ability. At the beginning of each month it is assumed all players are of equal ability and progressively adjusts as players move up the score table. I will continue to work on the score tables and add new features as time goes by.

We have bene working on a new set of weapons and attachments made from mesh. These look much nicer than the original weapons. They also have built in new special effects using some SL features that simply were not available at the time they were originally constructed. Whilst some HUDs will keep there original animations, some of the others such as the Katana will have new animations. These have been captured in our studio and are much more realistic. I will post more about these soon, but heres a quick snapshot of the new katana and boxing gloves… 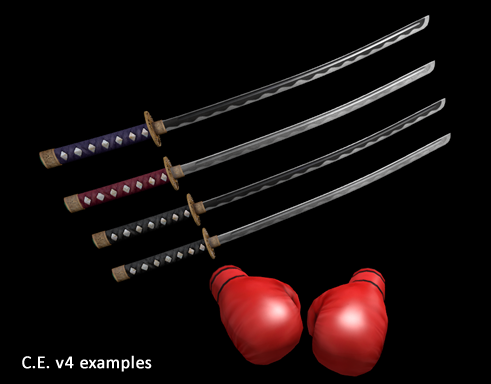 The biggest change is with the HUDs. We have completely revamped the scripts and design for these to improve responsiveness and reduce lag. They are now really quick to react to the players input! The attack panel appears slightly different and can be positioned around the screen seperately from the health and stamina bars (which are much larger than in prior versions). Hit points have been adjusted to balance the new speeds etc. although some of this is subject to change. With the original HUDs stamina does not play a huge role as I stripped out most of the intended functionality to reduce lag, I have now been able to add much back without any loss in performance. Stamina now depletes slightly when you make regular attack as well as power attacks but restores quickly.  As before health only restores when stamina is full.

So there is a lot to this update. Stage 1 is this website and new weapons. We will not be stopping after this though. We plan to release various games and activities that will be compatible with the combat evolution system and hope to build the community elements of this site to offer a fun feature rich grid wide game experience. There will be a new HQ on Devils Moon where you can practice your skills and we have much more planned down the line.